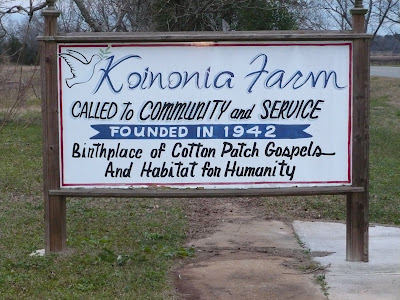 Following our visit to Fort Benning, our GPS (affectionately named "Hilda") led us on a lovely route through the Georgia countryside to the town of Americus, and we have happily landed at the Koinonia Farm community where we were warmly welcomed and befriended.

Koinonia (from the ancient Greek, meaning fellowship or community) was founded in 1942 by two couples who were committed to demonstrating the teachings of Jesus in their everyday lives. They worked with local sharecroppers, broke racial and socioeconomic barriers by worshiping with people of any race or background, and committed themselves wholeheartedly to a life of pacifism and nonviolence. Koinonia paid black and white workers equal wages, and created a community where people of all races lived a life of equality and mutual respect.

The mission and work of Koinonia did not sit well with many residents of the surrounding area, bringing years of threats, boycotts, sabotage, bombings and shootings that became part and parcel of the early years of this dedicated community. The Ku Klux Klan was heavily involved in the fight to break the spirit of Clarence Jordan and the other residents of Koinonia, and bullets, bombs and burning crosses were all used as tools in the fight. And although the nation's eyes were focused on Selma, Montgomery, and other hotbeds in the fight for racial equality, the struggle at Koinonia was seen by many as equally important in the wider movement.

Now, with the fires of racism and the struggle for racial equality safely in the past, the people of Koinonia have been able to focus on their spiritual activism, small businesses, and various ministries of good will and service. 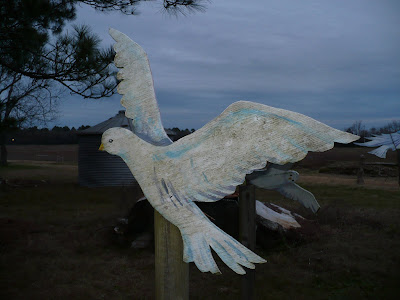 Some of the stewards/residents here at Koinonia are involved in several cottage industries, including an online bakery store that sells home-grown pecans, handmade chocolate pecan bark, coffee, and other delicious goodies, and an online bookstore offering books which detail the writings and teachings of their founder, Clarence Jordan. There is also a very nice print catalog available by mail for those who prefer to shop the old-fashioned way. (Perhaps you can consider their products for next year's holiday season and other special occasions!)

Aside from these projects, residents busy themselves with animal husbandry, organic gardening and various ministries which build bridges to the surrounding community in myriad ways, including peace and justice work, home repair for those in need, Bible study classes, and other forms of outreach. Known as the birthplace of Habitat for Humanity, Koinonia has been a progressive and forward-thinking Christian community for more than 60 years

We are just beginning to develop a basic understanding of the community's structure and governance, and you can imagine that it has been through many iterations since the early 1940's. Consensus certainly plays a part in how decisions are made, and non-profit status provides another structure upon which the community can hang its collective hat. There appears to be a long and thoughtful process for interns and others who would like to explore membership (full members are known as "stewards"), and we hope to glean more from our conversations as we experience life at Koinonia for a few days.

Tomorrow, we will do some volunteer work sorting pecans or helping in the bakery, and then lead some Laughter Yoga and improv games at the community New Years Eve party. We will post more photos and news from Koinonia over the next few days before we head for the Florida panhandle and the Gulf of Mexico! 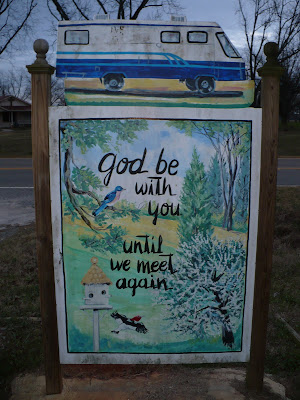