Over the last few month or so, we have learned what an idiosyncratic place New Mexico truly is. Old friends who lived here in the 60s and 70s had always alluded to the rugged individualism of New Mexicans and the ways in which people consistently reinvent themselves out here, but it is only through first-hand observation and experience that we have now truly seen this phenomenon for ourselves. In fact, it is so intriguing that New Mexico feels more and more comfortable to us both, kind of like finding an old pair of hiking boots that fit so well but were somehow forgotten along the way.

In posts from Taos, we certainly shared our explorations of the Taos mesa and mountains, pointing out how Taos is still an outpost of individualism and creativity despite the difficult economic climate and other factors.
Now, here on the more remote mesas west of Albuquerque, we have discovered another significant outpost of incredible people who live in various intentional and unintentional forms of community, mostly in harmony with one another and with the spectacular land that unites them underfoot.
Here at El Morro RV Park, a lovable cast of characters cooks fabulous food, cares for guests, and provides a sense of interconnectedness and community for most anyone living within a forty mile radius of this sweet spot beneath the cliffs on Route 53. 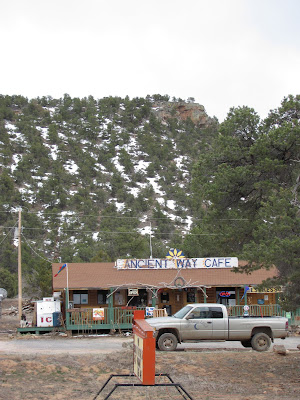 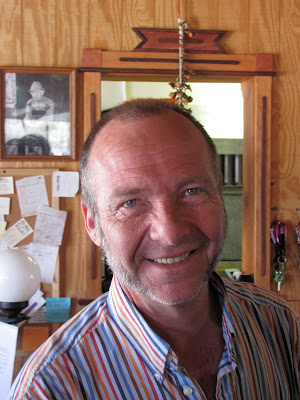 Maqui, the general manager of both The Ancient Way Cafe and El Morro RV Park, is the central figure around which this community revolves, and folks from the Zuni Pueblo, the Zuni Mountain Sanctuary, and every nook and cranny of this widespread area regularly come to sit at his tables, chat over coffee and consistently delicious homemade food, and share gossip and news from the area. There is even a free Reiki clinic and community drumming circle every week right in the RV park's yurt, with plans for a larger yurt space in the making.
Our new friends Standing Feather and the canine Father Guido Sarducci (among others not pictured) also welcomed us with open arms, paws and hearts. 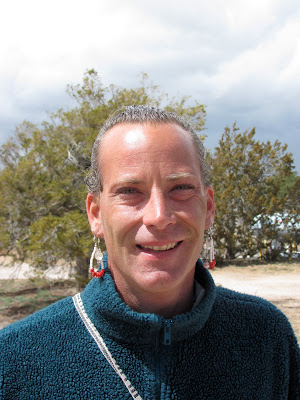 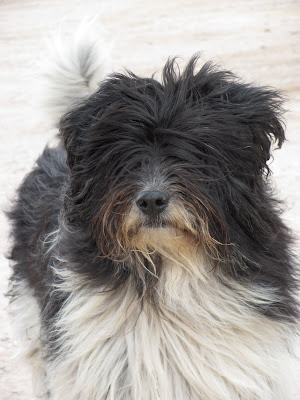 Across the street, The El Morro Area Arts Council runs the non-profit El Morro Old School Gallery (where we offered a free Laughter Yoga session just this morning), and yoga classes, art exhibits and other activities keep the cultural bar high here in an area that many would perhaps dismiss as "the middle of nowhere" if they were just passing through. In fact, those who live here say that there is often so much to do that one can choose to have a very active social life at any time of year, except when a harsh winter like this one messes with the best laid plans and intentions. 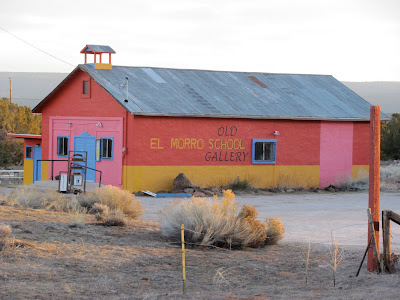 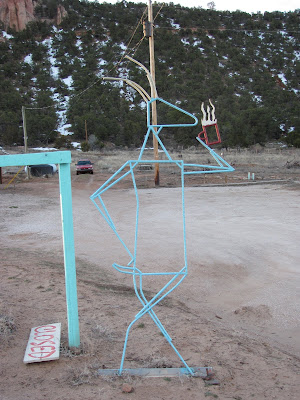 Last night, Maqui and another new friend from the RV park took me along to a potluck dinner at the Zuni Mountain Sanctuary, an intentional community which is part of the Radical Faerie movement, a movement which holds earth-based spirituality and an openness to varying forms of gender identity and sexual orientation as central pillars of its existence. The people at ZMS live an honest and healing life close to the land, welcoming visitors year-round to their magical spot on the mesa nearby El Morro. As a non-profit organization welcoming tax-deductible contributions, ZMS offers creative workshops and gatherings for like-minded people who share their lust for a life of spiritual depth, creativity, open communication, and interdependence.
Today at breakfast, we spoke at length with a middle-aged man who lives at the Zuni Pueblo about forty miles west of here, and he spoke candidly about life on the Pueblo, where the Tribal Council wields power in ways that sometimes pit family members against one another in the interest of land, water rights, and other salient issues of the day. He described life in the Pueblo as being like "a barrel of crabs", and we were saddened but not surprised to hear of the economic strife that plagues so many Native Americans in the Southwest. We visited the Zuni Pueblo yesterday, and it is quite clear that hardship is the norm for many residents of the Pueblo, and making a break for the wider world is often difficult or impossible for most. On the bright side, the hospital at Zuni is considered the best Indian hospitals in the country, although lamentably every doctor and nurse employed there is non-Native American.
Speaking of the Native Americans of the Southwest, we learned over the last few days that the Pueblos (a Spanish word meaning "town") are basically ancestral lands that have been inhabited for centuries by the different tribes, while reservations are lands to which Native Americans were removed when the U.S. government wanted them out of the way. For those living on the nearby Ramah Navajo Reservation, this past winter has been very difficult indeed, and eleven Navajo died this winter from symptoms related to either cold or hunger. So even as we travel our merry way through the Southwest on our journey of discovery, there is quite palpable human suffering just around the corner.
If conditions were not so harsh here on this mesa, we would perhaps consider making a life in this community as well. There is a great deal of richness and diversity almost hidden amidst the cliffs and massive rock formations, but we will, at least, be longtime friends of this intentionally unintentional community that rotates on an idiosyncratic axis fueled by the land, the people, and a common desire to live a good and honest life.
Today, the folks at The Ancient Way Cafe cooked a red meat birthday cake for Tina, and tomorrow morning Mary and others will offer free Reiki at 8am for those who come to the nearby yurt for healing. We will leave a piece of our hearts here in El Morro, and we depart with gratitude for our new friends who provided an experience of coming home to a place that we didn't even know was home, but in fact, turned out to be just that.