Mary has a penchant for finding curious toys and objects wherever we go, and many of these become like talismen or mascots for us, hanging out on tables, altars, dashboards, and other places where they collect dust and sometimes become a part of our family landscape (like this rubber duck that Mary found in Chama, New Mexico on the banks of the river---he still lives in our shower). 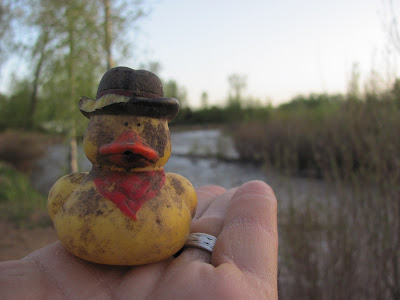 Once upon a time, Mary found a 2-inch replica of "Dipsy", one of the four "Teletubbies". For those of you unfamiliar with the Teletubbies, they are a group of creatures made famous by a somewhat psychedelic British television program that aired for many years on American PBS stations. The Teletubbies were made especially infamous by Jerry Falwell, who claimed that one of the characters---the purple "Tinky Winky" who was festooned with a triangular purple antenna on his head and carried a purple handbag---was gay. 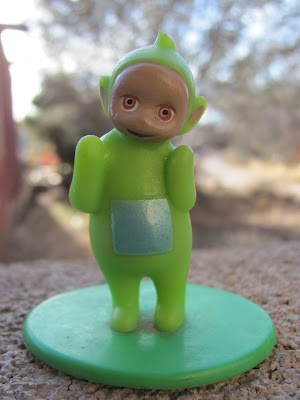 At any rate, our little green Dipsy has been living on our front porch among various rocks and stones for many months, and two neighborhood girls somehow took a shine to him. Like many children here in The Commons, these girls see precious little television and have no notion of who or what the Teletubbies are, but they periodically knock on our door, politely ask to borrow Dipsy, and then just as graciously return him when they're done playing. It's a sweet ritual, and it's amazing how a little 2-inch broken plastic statuette can bring such joy and imaginative play to two creative, innocent and beautiful children. 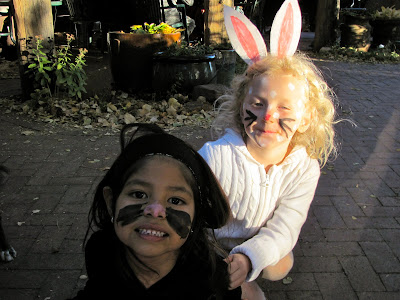 Posted by Laughter Incorporated at 10:20 AM

Email ThisBlogThis!Share to TwitterShare to FacebookShare to Pinterest
Labels: humor