In our brief time here in New Mexico, we've learned quite clearly that water is one of the most important and potentially contentious issues facing residents of the Land of Enchantment. Most of the people and communities that we have visited are blessed with reliable wells which are often as deep as 200 to 300 feet, but it is probably safe to assume that not everyone here is so lucky.
The modern acequia (ah-see-key-ah) system was apparently developed by Spanish explorers and colonists who came to what was later to become New Mexico. In the 15th and 16th centuries, the Spanish visitors observed sophisticated canal systems employed by the Pueblo Indians which were quite similar to the original acequias built by Moorish settlers in southern Spain. 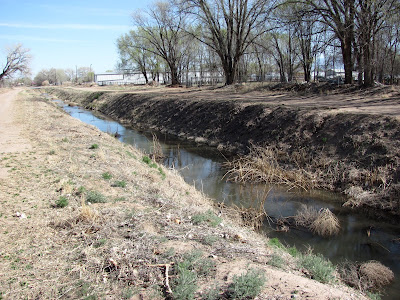 In modern-day New Mexico, when a family or individual buys land, they generally also purchase water rights to that land, giving them access to water from the nearby acequia. While some acequias are owned and maintained by individual families and passed down from generation to generation (and often shared with neighbors), some (like the one lined with concrete pictured below) is apparently owned and maintained by the local county government, and those who live along it have the right to open their individual sluice gate in order to irrigate their fields. The acequias in certain regional districts are apparently often administered and controlled by a local acequia association that elects a local official to assist with the process of the distribution of water, and it must be a rather challenging and politically risky business at times. 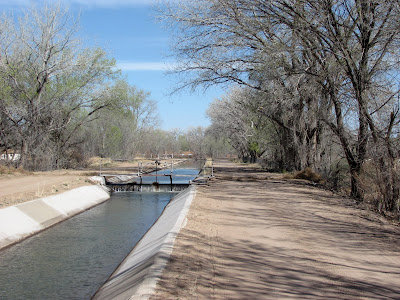 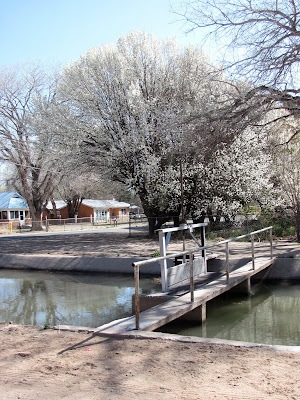 The New Mexico Acequia Association website states that "acequias are the historic communal irrigation systems that support the culture and livelihood of thousands of families in New Mexico. Our mission is to sustain our way of life by protecting water as a community resource and strengthening the farming and ranching traditions of our families and communities." 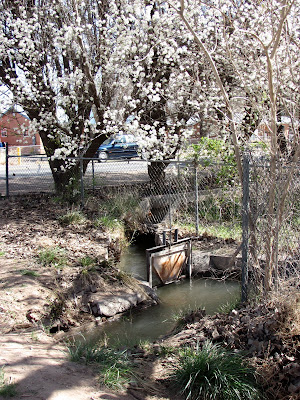 If we do indeed live in New Mexico, we assume that our understanding of the importance of water will grow exponentially with time. For now, this precious and life-giving resource is certainly something to be respected and conserved in a region that can see less than 20 inches of rainfall and more than 300 days of sun in any given calendar year.
Posted by Laughter Incorporated at 1:36 PM